JUST ORGANIC IS NOT ENOUGH.

We are a family business located in a small village called Naramata near the south end of the Beautiful Okanagan Valley in the heart of British Columbia, Canada.

Our purpose is to provide unheated, non GMO, pure organically grown foods at a fair price. That means paying more to the grower in some cases and selling lower to the consumer in most cases. To do this we go to the source. There we learn how the food is grown and processed to insure it is living food farmed ethically and sustainably. Most products are shipped directly from the producer to us.

These foods are what we want to eat but many of them just aren't to be found in stores, so it's symbiotic. Many foods that are called raw in stores are not. Some are dried at very high temperatures, some nuts are heated for shelling and often they are over heated by the sun while at sea in the shipping containers to over 170F. None of our whole foods have additives.

We are helping others as well as ouselves acquire the freshest and tastiest truly raw foods we can find. Quality doesn't need to be higher priced. By buying wholesale you can pay what the stores are paying.

We sell foods that have been grown in an earth-friendly and people-friendly way. Being growers ourselves allows us to appreciate what our suppliers do to provide such high quality food.

Have you noticed an increase in unhealthiness, more chronic illness more obesity. It seems everyone is struggling with some ailment and that doesn't seem normal. What caused all this sickness and suffering? Did nature goof or man? It seems more likely to be man. Were well meaning people giving us bad information?

One of our family members had a life threatening disease and the doctor we were dealing with had to make sure we had no hope. How could he be so arrogant? I had many doubts about our medical ways. An article in an American Medical Association Journal reported over 300,000 deaths a year in hospitals are caused by doctor errors. America with the most doctors has the worst health . We are told we have a 90% chance of dying from either heart disease or cancer. Clearly something isn't right. Suspicion was growing that our intellects had become too dominant and smothering our common sense. Sure, man was doing very clever things, but were they wise? There seems to be a price we pay for each new intellectually derived creation. The cars that were to bring us together have separated us. The computers that were to save us time made us busier. I appreciate times when people are humbled to be more dependent on others like after a big snowfall that shuts everything down.

Liberation from health fears began for us in 1996 when we realized how what we eat affects us. It seemed that the only sane way of living is to live within the laws of nature. How does nature serve her food? Fortunately we were already living on a beautiful organic orchard in the southern Okanagan valley overlooking the lake. This valley has a unique climate that allows us to grow some of the best fruit anywhere. Naturally a good portion of our diet came from our own orchard and garden. It was not a gradual transition of diet for us. One day we simply threw out everything that we deemed not whole and raw out of the house. That way we wouldn't be tempted. Our house was to be a safe haven for eating naturally. We had many challenges but the positive results were more than enough to prove the rightness to us and after awhile eating habits change completely. Cravings for old comfort foods fall away and you are free. Free from fear of illness, free from enslavement to the medical system, free from irritability and even free from societies dogma. 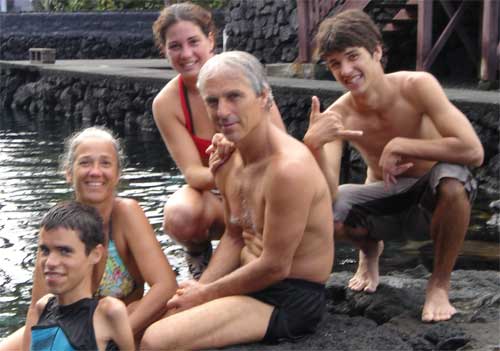 We are a family of five working together with others to provide the same foods that we enjoy, whole foods that have been grown organically, sustainability and prepared without hurting their viability. Many of the foods we wanted are from far away and too expensive in small quantities. By buying volume we have found a way of importing special food that was far for too expensive otherwise and providing for others at low prices. We are helping each other.

UNNATURAL food is the principal cause of human degeneration. It is the oldest vice. If we reflect upon the number of ruinous dietetic abuses, and their immemorial tyranny over the larger part of the human race, we are tempted to eschew all symbolic interpretations of the paradise legend and ascribe the fall of man literally and exclusively to the eating of forbidden food. From century to century this same cause has multiplied the sum of our earthly ills.

The Dalai Lama was asked what surprised him the most; he said,
"Man, because he sacrifices his health in order to make money.
Then he sacrifices money to recuperate his health.
And then he is so anxious about the future that he does not enjoy the present;
the result being that he does not live in the present or the future;
he lives as if he is never going to die, and then he dies having never really lived."